Our mission at Jerry Baird's Seasonings is helping families and friends come together around a wonderful meal. As a cowboy, chuckwagon cook, family member, Soldier, and friend, we understand the importance of gathering around a quality meal to nourish our daily labor and friendship. 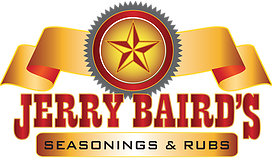 Why we do what we do?
Jerry and his friends believe in Making Something Good, Great! In doing so, we are able to help bring families and friends together with a memorable meal. Jerry always made sure that the cowboys with whom he worked had a satisfying meal after a long, hard day’s work. His seasoning made it the best food they had eaten and they wanted to purchase and take his seasonings home, and so the business began. Jerry Baird’s Seasoning family guarantees quality and freshness. We want you to benefit with great tasting food, every time you use Jerry's seasonings.
Some of our main goals:

#1 Customer Service
Adding enjoyment and success for the family with cooking and meals by providing a variety of quality seasoning, in an easy-to-order manner. Order by a phone call, text or order online.

#2 Giving Back
To look for opportunities to bless others around us, working as a team, and giving our best effort.

#3 Only the Best
To strive in providing the best authentic and fresh seasoning to our kind folks.

Let us help you achieve your business goals

Cody is a hard working rancher and a downright fun granddad. Karen is the best customer service and proud homemaker

END_OF_DOCUMENT_TOKEN_TO_BE_REPLACED

Professional Photographer and designer of the "Ribeye and Cowtails" Cowboy Cookbook. Specializes a a professional designer, and photographer with 40 years experience!

Captain in the Army, married with four children.

CHUCKWAGON MEALS DEFINE TEXAS
Texans might know that the mockingbird is the official state bird of Texas or that the bluebonnet is the official state flower, but some might not be aware that the chuck wagon, an old-style wooden wagon equipped with a cook stove and provisions traditionally used by cowboys, was named the official vehicle of the Lone Star State. [Senate Concurrent Resolution No. 8.] That’s good news for Jerry Baird who has been cooking “Chuck-wagon Style” and developing his spice line for over 30 years here in Texas.
In 2005, in an event to let Texans know that the Chuck Wagon had become the Official Vehicle of Texas, Jerry and his friends were invited to circle their wagons at the Capitol and feed the State Senate and Governor of Texas.

The Academy of Western Artists was formed to recognize and honor outstanding individuals who, through their accomplishments, preserve and perpetuate the traditions, values and heritage of the American Cowboy. There are several categories for which honors are given, including “those who continue the time-honored arts of campfire and chuckwagon cookery”. Jerry Baird was given recognition and encouragement by the Academy in 2005, thereby receiving the Will Rogers Western Artist award for the second time, for bringing the cowboy movement into the 21st century through his contemporary work and by carrying on the traditions of those who preceded him in the use of the chuckwagon.
Jerry Baird and his gourmet seasonings were featured multiple times on the Texas Country Reporter, a very popular show that airs each weekend throughout Texas. Our seasonings are also being sold on their web-site at www.texascountryreporter.com. Annually, we are honored to be able to participate at their annual festival in Waxahachie.
In addition to the honors and championships that he has won, Jerry is also very proud of being selected for cooking during the 1996 Cattle Drive from Texas to Montana, and for the Executive Committee of the 1996 Olympics in Atlanta, Ga.

FI Enterprises LLC is a proud member of the Go Texan Program, the most comprehensive marketing program for Texas-made products ever launched.
We welcome the purchase of Jerry Baird’s Gourmet Spices from our secure site, and we fully expect to be offering our products in major retail stores in Texas in the near future. As new outlets are established, we will add them to our web site. Whether from our web site, or from your local outlets, we hope that you will add Jerry’s seasonings to your pantry so that you too can have a taste of the Old West with the convenience of today.

Jerry Baird was featured on a very popular TV show called the Texas Country Reporter in 2006 and 2007. Jerry was cooking from his chuck wagon for some ol’ greasy belly cowboys at a ranch in West Texas, and Bob Phillips did a terrific job of featuring Jerry Baird in his true glory.


WILL ROGERS ACADEMY OF WESTERN ARTISTS

Surely, most folks have heard of Will Rogers. Annually, there is a get together in Ft. Worth called the Will Rogers Academy of Western Artists that was formed to recognize and honor outstanding individuals who, through their accomplishments, preserve and perpetuate the traditions, values and heritage of the American Cowboy.

There are several categories for which honors are given, including “those who continue the time-honored arts of campfire and chuck wagon cookery." Jerry Baird was given recognition and encouragement by the Academy in 2005, thereby receiving the Will Rogers Western Artist award for the second time, for bringing the cowboy movement into the 21st century through his contemporary work and by carrying on the traditions of those who preceded him in the use of the chuck wagon.

We’ve made more than a few references to Jerry’s Chuck Wagon. Did you know: thanks in large part to the efforts of Jerry Baird, the chuck wagon, an old-style wooden wagon equipped with a cook stove and provisions traditionally used by cowboys, was named the official vehicle of Texas?
In appreciation of this great event, Jerry Baird and his friends circled their wagons and entertained the State Senate and Governor of Texas with some wonderful chuck wagon food seasoned with Jerry Baird’s Gourmet Spices.

• the “Superbowl” championship in 1988,
• the National Chuck Wagon Championship in 1996,
• the American Western Artist Superbowl Chuck wagon
Challenge in 2004, and many, many others.

One might wonder, what is Jerry’s secret? Why has a retired college professor and rancher been so successful in entertaining tens of thousands of folks with some of the best “gourmet” food that they have ever eaten?


THE SEASONINGS WE OFFER

The truthful answer is Jerry’s “secret” is his All Purpose Seasoning which can be used on barbecue, ribs, briskets, fish, chicken, popcorn, Bloody Mary’s, and whatever.

In fact, “You can put it on anything that ain’t movin’!”TM There have been a lot of attempts to duplicate Jerry’s All Purpose Seasoning, but there just is no other like Jerry’s. And, that is why so many other chuck wagon cooks also use this product. All of a sudden, they also become gourmet cooks, and they also can feed food gourmets with confidence. And, they also win championships.

Note: our No MSG Seasoning version of the award-winning All Purpose Seasoning is now available!

Nowadays, Tex Mex has become very popular. Tex-Mex is a term for a type of American food which is used primarily in Texas and the Southwestern United States to describe a regional cuisine which blends food products available in the United States and the culinary creations of Mexican-Americans that are influenced by the cuisines of Mexico.

A given Tex-Mex food may or may not be similar to Mexican cuisine, although it is common for all of these foods to be referred to as “Mexican food” in Texas, the United States and in some other countries.

In many parts of the country outside of Texas this term is synonymous with Southwestern cuisine. Our Fajita Seasoning, Butter Flavored Lemon Pepper with Chipotle, Chuckwagon Chili Mix, Jalapeno Sizzling Salt, Creole Seasoning, and even our Rib & Brisket Rub make the cooking of Tex-Mex food so much easier. Shucks, even Cajuns love Jerry’s seasonings.

By popular demand, we have provided this “gourmet food store”, better known as website, so that anyone, anywhere, can use our seasonings. Each seasoning can be bought individually, or by the case. We also offer a wonderful gift box & seasoning six pack. Food gifts are usually very popular gift ideas, and you just can’t go wrong in giving some of Jerry Bairds seasonings to your friends and relatives.